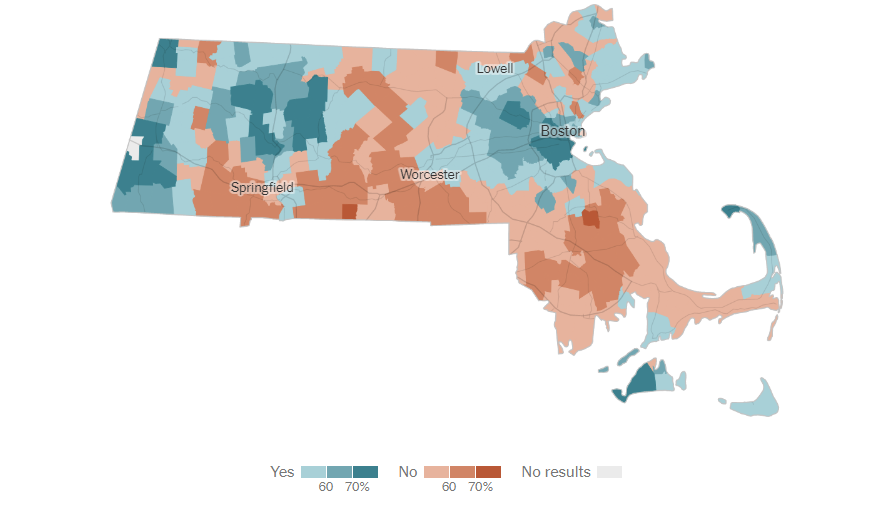 Results of Question 4 election in Massachusetts by town. Source: The New York Times

53.7 percent of Massachusetts residents voted “yes” in favor of the Work and Family Mobility Act, which will go into effect on July 1, 2023. Though this looks like a narrow majority, many counties saw a more decisive vote. “Yes” votes held a larger margin, above 80 percent, in more urban regions like Cambridge, Somerville, Brookline, Northampton, Amherst, and Provincetown. “No” votes exceeded “yes” votes in smaller areas like East Bridgewater, Wales, Montgomery, Monroe, Rochester, and Southwick. Consequently, the “yes” counties’s majority votes surpassed the “no” counties’s split votes, pushing the act into place.

Massachusetts organizations had mixed reactions to the Q4 vote. As the numbers leaned in favor of passing the Work and Family Mobility Act, Nicole Caravella, spokesperson for Yes on Q4, expressed that they were confident in the positive results of their campaign efforts.

Shortly after the results came out, organizations such as Fair and Secure Massachusetts expressed their disapproval. Henry Barbaro, a climate scientist volunteering with Fair and Secure MA, voiced concern that the law would incentivize illegal immigration by allowing those without legal documentation to exploit their “American” identity and bypass the immigration process.

A recent Facebook post by Fair and Secure MA criticized the FORWARD economic development bill’s 9.2 million dollar request for the Registry of Motor Vehicles (RMV) to implement the Work and Family Mobility Act. This budget allegedly ensures that the RMV meets staffing and procedural requirements for new services, but Fair and Secure MA questions how much the RMV needs to increase its annual budget to handle the new law. Former Governor Charlie Baker admitted that inaccuracies affect long-term predictions, but was confident that the budget requested in the bill will be sufficient to address the influx of new families in need of assistance.

Under the Q4 Law

Amidst illegal voting concerns, O’Malley described how the current automatic voter registration system works. The RMV screens registrants for citizenship documentation before submitting them to the Secretary of State for voter registration purposes. O’Malley pushed back against the prospect of illicit voting or citizenship, asserting that “a citizen is only automatically registered to vote if they have submitted to the RMV a US Passport, US birth certificate, or US naturalization papers.” This process ensures that any noncitizen or citizen who does not demonstrate evidence of citizenship to the RMV will not have their name and address sent to the Office of the Secretary of the Commonwealth for voter registration.

As of now, sixteen other states have laws that allow undocumented immigrants to obtain a driver’s license. These states reported general decreases in the frequency of automobile hit-and-run accidents. The impact of laws similar to Q4 in other states foreshadow its potential impact on Massachusetts road safety; they also influence the opinion of Massachusetts residents on giving undocumented immigrants driver licenses and other recognitions. Depending on Q4’s outcome, political parties supporting or opposing the law may find themselves thrust into the limelight again. 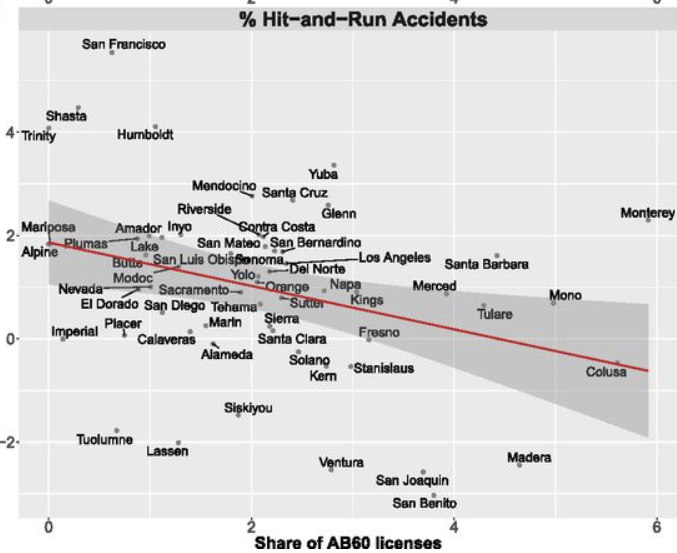 A similar act in Connecticut correlated to a 15 percent decrease in hit-and-run crashes across ten cities with the greatest density of drive-only licenses provided to undocumented immigrants. These licenses are not valid for federal identification and cannot be used to vote. Massachusetts has not yet revealed whether the RMV will offer drive-only licenses or modify the appearance of the standard license for new applicants. 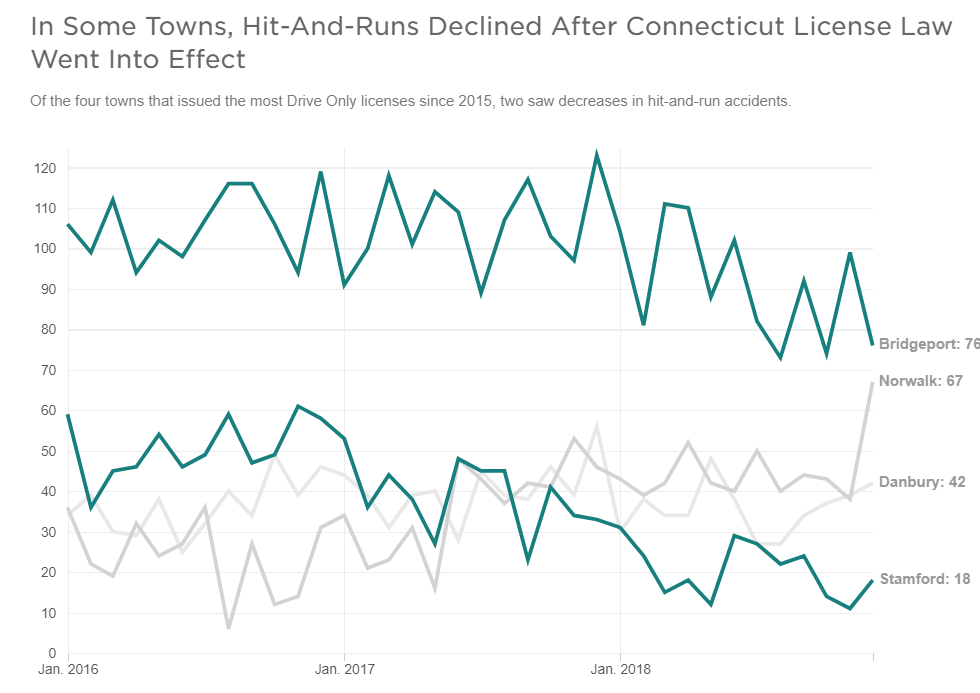 The graph shows a decrease in hit-and-run rates in some towns in Connecticut over a two year period. Statewide in Connecticut, hit and run rates have decreased 9 percent between 2016 and 2018. Source: Connecticut Crash Data Repository, Department of Motor Vehicles; Credit: Sean McMinn/NPR

Both states saw a downward trend in hit-and-run accidents. California, Massachusetts, and Connecticut are within the top ten states with the highest percentage of foreign-born population, making it likely that Massachusetts’s trends will follow suit. Both immigrants, making up 13.7 percent of the U.S. population, and Q4 supporters hope that the Work and Family Mobility Act will make Massachusetts safer, but its effects are not guaranteed. It will take years for researchers to come to credible conclusions about the act’s impact on road safety.

As more Massachusetts residents apply for driver’s licenses, licenses will soon identify undocumented immigrants that had not been counted in the census, painting a clearer picture of Massachusetts’s vast immigrant population. These individuals will also be required to contribute towards automobile insurance tax for the state, supporting state infrastructure and upholding the budget for the Registry of Motor Vehicles.

As residents use the effectiveness of the Work and Family Mobility Act to evaluate their newly elected state leaders, they will watch the RMV closely for the next few years. With time, we can analyze Q4’s long-term impact to continue to make informed voting decisions. The next time you vote, remember that your voice counts.

Reactionary politics have never been kind to academia. While a well-educated population is deemed a pillar of a democratic society and strong economy, authoritarian regimes in contrast have a dark history of mistreatment of students and academics. China’s cultural revolution, Mussolini’s persecutions of leftist intellectuals, and the Nazi book burnings show how order and state […]

New Hampshire, like Iowa, has always been a key state and area of hyper-focus for presidential contenders. It holds the first primary, resulting in a disproportionate influx of rallies and campaigns in the small state and, in-turn, a politically engaged electorate. At a town hall event in Concord on November 9, Joe Biden served chili […]

The Problem with Dahmer: True Crime Shows and the Broken Criminal Justice System